How were they on the wear indicators?

The Englishman said:
How were they on the wear indicators?
Click to expand...
They were not completely worn out. There was one inner hole, in one set of holes, that was getting close but not yet flush. A lot of the other holes were considerally deeper. BTW I had ordered a new set because I would need them for Legions in January regardless and they are on backorder. So might as well get the ball rolling........

DRAGRCR said:
When all is not right in Ronnie's world.

OK, so I went to Red List in Bakersfield / Famoso on April 9th. Overall, the car did not work right. I was bummed. To add insult to injury, this likely allowed one of my Friends to squeak past me on points and pocket the $1000 cash to win. In the fall at Famoso / Red List and recently at MATS the car worked beautifully. At the Match race Madness in Feb at Irwindale it even did a 6.10 in the 1/8th and did some amazing PB 60 foots 1.32 and 1.33. Now the car would launch OK on the hit and then by the 3rd pass out of 13, the car spun when it shifted to second gear. Pass after Pass it got progressively worse where it started spinning all the way through 2nd gear and then it even short shifting to 3rd and even spinning a little on the 3-4 shift. All the while hooking on the hit. VERY confusing. If it hooks on the hit, the only thing I can think of is the prep down track is insufficient. I complained. They sprayed more and dragged the track. It did not help at all. Are they spraying straight alcohol? Are they cheaping out?
The tires are the 28X10.5R17 Hoosier DBR and they always worked. Amazingly well really. They are approximately 2 years old. The last 6 months ONE of them started losing a little air. Maybe 10 pounds in 3 weeks when the car was being stored.
So, now my world is all jacked up. I decided to go to Irwindale less than a week later for the Thursday night Drags. 610 Miles RT and $300 in fuel (well spent BTW). I HAD to see what was going on. It drives me crazy. So, before I went out there, I swapped the slicks side to side and that gave me an opportunity to soap up the offending tire. Air was coming out the SIDEWALL. It did NOT do this at all earlier in its life.
So, I get to Irwindale and the car hooks good on the first run and does not spin on the 1-2 and runs a 6.232. Second pass it chatters the tires all the way through first but still manages a 6.229. Third pass it spins on the hit and I pedal it to a 6.60. Fourth pass it spins and I abort that pass altogether. Son of a bitch.
I went back to the pits and swapped out wheels and tires. I HATE doing this at the track but I came prepared. Hoosier 29.5X11.5R18 DBR on OEM Demon rims. A much taller and heavier setup. Car DEAD HOOKS like I have not felt in a while. Runs 6.229, 6.191 and 6.200. Another note. With the old tires the car was trying to spin donuts in the burnout. New tires burnout is dead straight. Removing old tires, one is normal dry slick rubber with minimal rocks, the other is MOLTEN. It was completely greasy / sticky with all kinds of crap stuck to it. This CAN'T be good for the Diff.
So apparently one of the smaller older tires delaminated and killed the sidewall. Next time do not blame the race track. Heavy Challengers with power KILL smaller race tires. Make a mental note.

vortecd said:
Contact Hoosier and see what they have to say
Click to expand...
They’ll say your vehicle is too heavy for this tyre 🤓

Big heavy car with big power are very hard on side walls.
People often point the finger at track prep or the tire surface when in fact it's the side walls are beaten to death.
It probably would be a non issue if the car weighed 3500 lbs. instead of 4300 lbs.

OK, Hellcat Dan asked me this. I double checked, and the tire that was molten/gummy/sticky was the defective tire. So it had less or no grip.

As you obviously know, the Hoosier is a very lightweight tire compared to the ET R.
The carcass can only take so many hits before it breaks down.
They will work but be prepared to rotate them to the dumpster every 20-30 runs.

Now, a hill billy points of view,, I can actually understand that info. God Bless Dick Trickel. He was running the same. I actually have to have newww shoes in the near future.

I am not a pro. So I do not shop this around. But I thought I would put this out there because it would be a shame to waste if someone knows someone..........

I "might" be coming home with an empty Treailer soon from Nashville. So Nashville to Kingman AZ straight down the 40. Approximately May 1 or 2. I could easily detour several hundres miles to pick something up (or drop it off). A car or other tidy cargo......

If you're close to Nashville for very long let me know, lunch on me.

Speedy! said:
If you're close to Nashville for very long let me know, lunch on me.
Click to expand...
I will. I might have to kill some time there. I'm supposed to be bringing something out for a VIP and not sure if delivering directly to him, or to a shop etc.

I had a pretty good outing at Irwindale Thursday. I was on the big tire that is taller and on a heavier rim, but still had the good fuel in the car. Ran a 6.24, then a 6.18 and finally a 6.14 as the night progressed. These were all cool down passes preserving the cooldown as much as possible. DA was 1450 going down to 550 feet. Not bad. I actually have new 28X10.5R17DBR's mounted on the Win Lites. Kind of regret not putting them on.....Maybe I could have improved on my 6.10 PB. I will kill it in the fall. I think the track is capable now...........

Also note, it is genuinely nice to be able to go balls out now without a word being said to me any more. So cool. 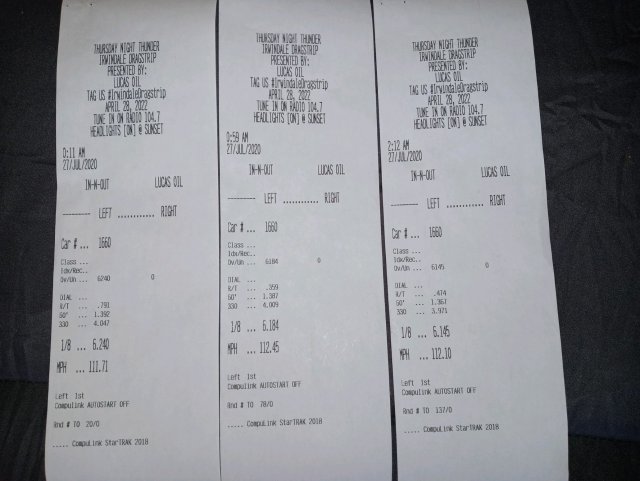 Sent from my SM-G781V using Tapatalk 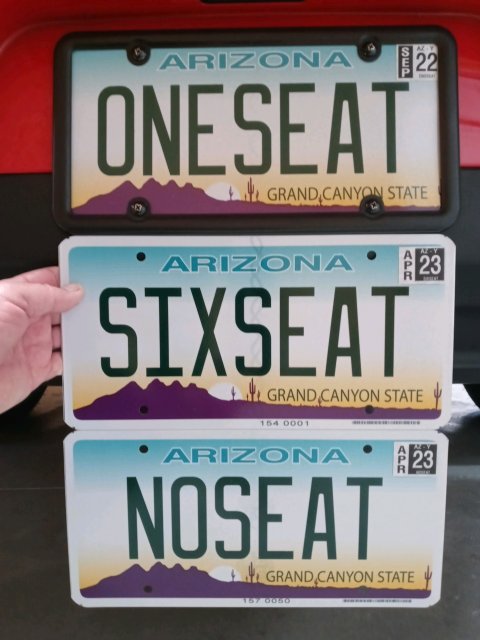 Just returned from Nashville. The Mustang was reunited with the Owners.......... 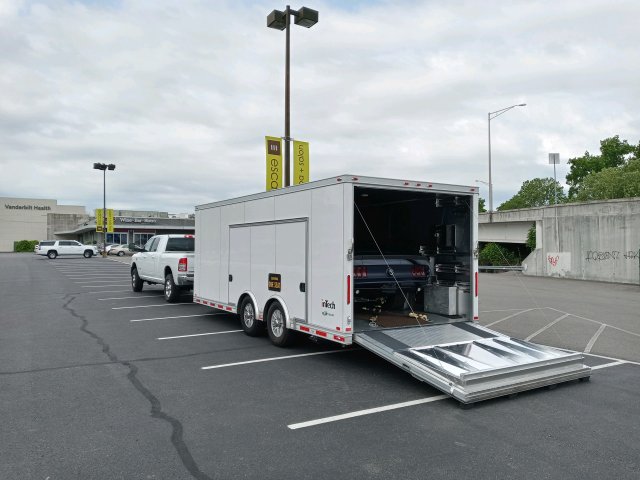 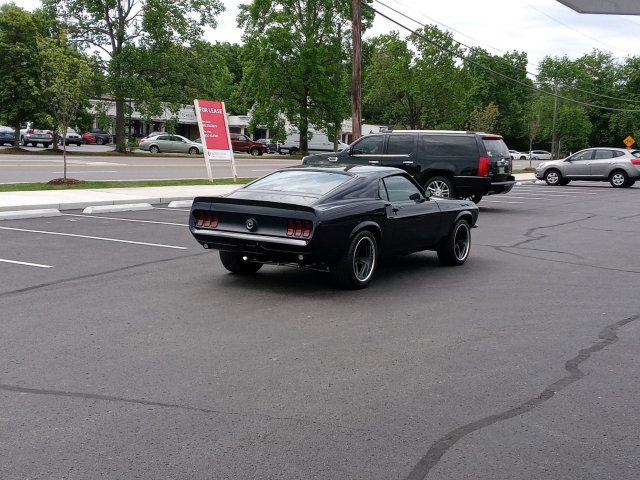 Ron’s transport services too the rescue! That poor trailer will never be the same😀 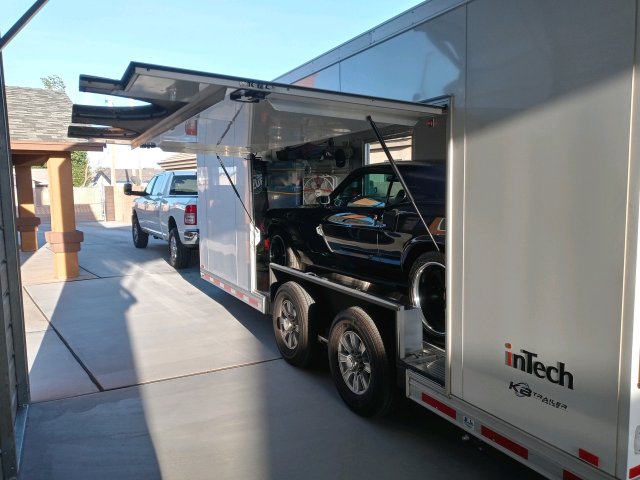 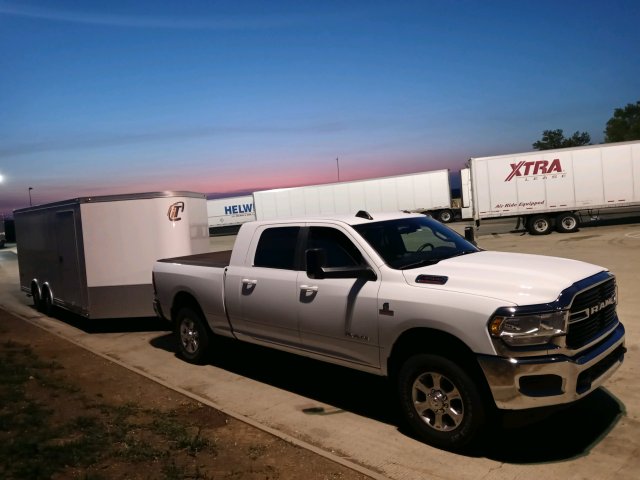