Add me to the 9 second club

I took a journey to get to this point. During the summer I had a 2.85 upper, 180 degree thermostat, catless mids installed. I also had suspension links installed so my 17" rims would fit. To be honest, I was pretty bummed out with a rating of 714 rwhp on the Mustang dyno. This was from a baseline dyno of 616 rwhp. I think they called the dyno a 'heart breaker'. I received the tune and the work was done by Peitz Performance near Katy, Texas.

I took the car and made some passes as is at Lone Star MOPAR Fest in early October when the DA was around +2,000. It was a hot and miserable day at Houston Raceway Park. My best time that day was 10.424 @ 133.94 and considering I had a 2.85 pulley I expected a lot better time.

I had been thinking about getting a set of Demon springs, but don't have the tools or knowledge to install them. Luckily I have a buddy who is a mechanic so I bought the Demon springs and had them installed.

I was invited to a track rental at Houston Raceway Park on November 3 and looking at the weather reports, it appeared we would have real good weather. When I arrived I was first in line and the guys there were doing an outstanding job of prepping the track. I have full seats and full weight and the only prep I do was putting the Mickey R's (305/45/17) at 18 psi.

So the track was ready and I lined 'em up. My Mickey's made a nice smoke show. As the green light went on, I revved up the car then launched hard. No spin, no nothing, but haul ass down the 1320 feet.

I knew I had made a great pass, but I didn't know what the time slip said as the time slips were at the starting line. Since I was the only one running, I made another immediate pass and this one felt the same as the first one. Pure hard launch, no spinning, no wheel hop. I did notice I was going into 5 th gear real near the end of the quarter mile, maybe about 50 feet from the end the car shifted.

I parked my car and walked over to the clip board and got both time slips, and there it was, the glorious 9.991 @ 136.95. I was literally blown away with the 60 foot times of 1.453 and 1.454 on the runs. There is no doubt in my mind that the Demon springs allowed my car a lot better launch than before I had them installed. 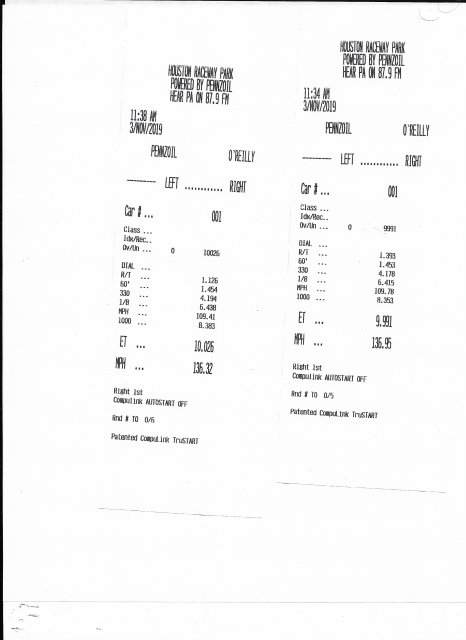 DA makes a huge difference. I normally only make passes in the spring and fall.

As far as dyno numbers go, it may be cool to have a number but being everyone is different I don't get to caught up in them. As long as you hook at the track, those are the real numbers of how much power your car has. One of my old cars ran faster then others that said they made 150 more hp on the dyno then mine did
"without DATA, you're just another person with an OPINION"
" without a real world test, it is all a guess"

You did it, the conditions were that, CONGRATS! Enter the time etc. on the RE 1/4 mi thread. Nice work.

Yes . You have a 9 second car . You have a time slip to prove it . It feels good to get that slip doesn't it . Lol I framed mine and hung it on the wall in my garage 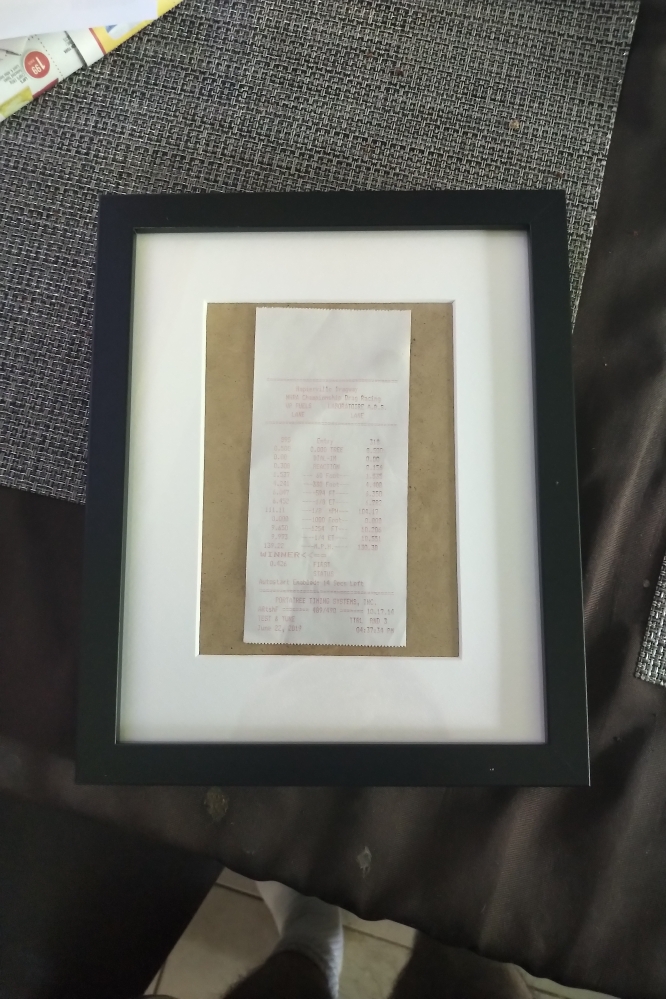 Hpindy said:
Yes . You have a 9 second car . You have a time slip to prove it . It feels good to that slip doesn't it . Lol I framed mine and hung it on the wall in my garage

TEXAS REDEYE said:
I made a copy of it and laminated it so I can carry it in the car, just in case someone talks trash to me, I'll just pull out the slip.
Click to expand...
Nice . That's a great idea!

Nice! Did they kick you off for no roll cage now?

I've personally been quite surprised(and truthfully disappointed) at just how air sensitive these things are. I have a considerable amount of blown motor experience in all sorts of weather and have never seen anything as air dependent as these cars.
Ah well, they're still a blast even in the sticky slow weather.

Did you have any runs before the 100hp increase?

If the prep was great, you could have experimented with raising the pressure in the tires, that may have put those 10.0s into the 9s as well.
OP

MiHiHemi said:
Nice! Did they kick you off for no roll cage now?
Click to expand...
Nothing was said. Had it been a test and tune night, no doubt I would've gotten my hand slapped, however since it was a rental, nobody said anything.

Then again they may not have cared given it was such a high 9. Had it been a 9.7 they may have said something. I really don't know.

You have a 9 second car. Look what Dodge did to get the Demon's record. Congrats

Congrats on the 9 second pass !
Alex is a good tuner & the Mustang dyno is a heart breaker to those that are expecting a large # but it's more real world. The only # that matters tho is the track ET's.
Alex also tuned my HC.

What was the DA on Nov. 3rd ?
Hellcat Nation

Kick it up a notch.

"The Truth is Told at the Track"!

Top Cat said:
BTW, Linda's right there, looking for me to make a mistake, LOL she can drive....and push, I love her!!!!
Click to expand...